A Tale of Two Cities: Commerce Vs. Industry

When I moved to LA in 1981, I was an outside sales rep, so I had to learn the city “on the run”. The first time I saw these two cities on the map:

City of
City of

I tried to envision what they looked like based on their names. I thought the City of would resemble Wall Street, with financial institutions everywhere. And the City of would look like or , with smokestacks forever.

Boy, was I wrong.

The City of Commerce, aside from its casino, and its outlet center The Citadel (which started life as the Samsom Tire & Rubber factory), looks like the industrial city (not quite like Cleveland though). 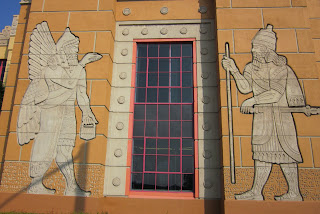 The City of , with its 219 residents (much like ) and oddly gerrymandered shape, is newer, and relatively green. Although it is geared towards business- 92% is industrial, 8% is commercial- it doesn’t have that Rust Belt city feeling. It has a regional shopping mall (Puente Hills), an award-winning golf course (Pacific Palms Resort, formerly Industry Hills Sheraton), and wants to be the new home of Los Angeles Stadium, if Los Angeles ever gets an NFL team again .
Posted by Lisa at 7:45 PM