Voyager Los Angeles is taking a voyage- will try to post next week! 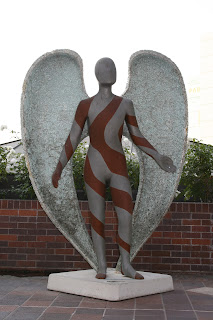 In the meantime, I hope the City of Angels looks over you!

Castles in the Air

When you visit a , you may come across something so unexpected, or weird, or beautiful, that you say “Wow! What’s that?” In 30 plus years of living in , I can think of three Wow! Moments:

When I moved to LA in 1981, I was driving around in looking for somewhere to live. I rounded the corner and saw an enormous blue building – “What is that?” It, of course, was the , known as the PDC. Since then, it has been joined by equally huge red and green buildings. 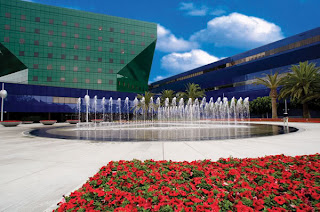 The first time I went down to the area around USC, I saw a 747 parked on the corner! 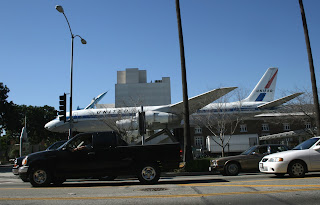 And how many castles have you seen in the Southland? Until the fires of 2005, there was a castle sitting on the hill overlooking . (Sorry, no picture!)
Posted by Lisa at 9:05 PM No comments:

I think most people have a set way of driving to work- they’ve figured out the best route to take, and they stick to it. But if you get off the beaten track, there can be a whole new world to see.

Case in point- I exit the 10 freeway at , then head north to Alvarado. Neither of these streets is particularly attractive. But- right after Alvarado forks off of , there is a street named Alvarado Terrace. One day, I decided to turn there. What a difference! Alvarado Terrace is full of gorgeous Victorian houses, 6 of which are designated as “cultural historic monuments”. I knew that the homes around USC, as well as the district, had some beautifully restored homes- but I did not know about this street. 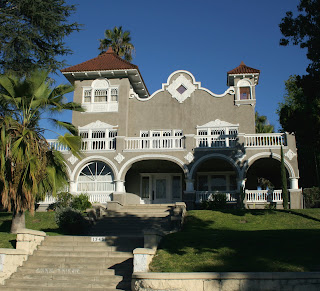 Shows what can happen when you take “the road less traveled”!
Posted by Lisa at 8:07 PM No comments:

5 Cool Things To Do In LA

If you have visitors- or you are visiting why don’t you:

Go to the Ennis-Brown house in the Hollywood Hills.
You probably know this Frank Lloyd Wright house, located at from the movies (most notably Blade Runner). Built in 1924, it resembles a Mayan temple. It used to be open for tours, but has been closed since the 1994 earthquake. Billionaire Ron Burkle just bought the house in July 2011. 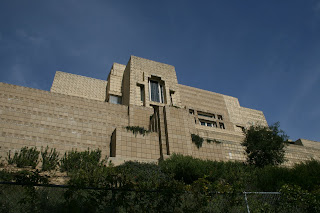 Swing on out to Tarzana.
Tarzana is named after the ranch purchased in 1915 by Edgar Rice Burroughs- who wrote Tarzan.

See the .
Everyone who is an Angeleno should see this work of art. And even if you’re just visiting, you should see it too. Built over a period of 30 years, with found materials, it is like nothing else you’ll see in LA. 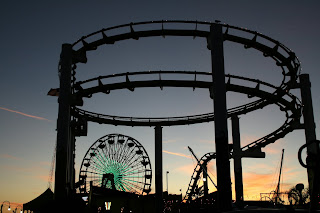 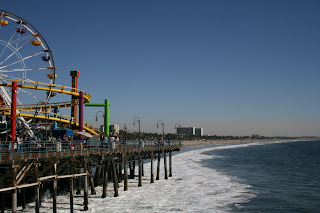 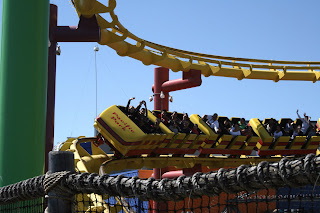 Turn On Your Love Light

I know what you’ve been thinking- “It’s really disappointing that LA has so few lighthouses.” Yeah, I’ve been thinking that too. I’ve come up with only three- in San Pedro; ; and a fake one in Marina del Rey at Fisherman’s Village, a faux fishing village (which is kind of run down, and very underutilized- but that’s a post for another day). There’s also Parker’s Lighthouse in , but that’s fake as well, being a restaurant. 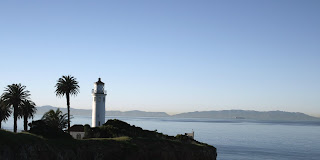 The lighthouses in San Pedro and Palos Verdes were once real, active lighthouses. Point Fermin lighthouse, located in San Pedro, was built in 1874, and was the first navigational light into the . Point Vicente, built in 1926, is in Palos Verdes, and is on the National Register of Historic Places. Both lights were extinguished during World War II. 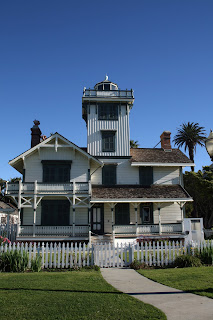 If you want to see these lighthouses, take PCH down through , then turn on going south, then onto . It will take you on the Palos Verdes peninsula. This is a beautiful drive, so be sure and bring your camera!
Posted by Lisa at 9:01 PM No comments:

Another one of my favorite houses in is the Wedding Cake house. Seen from the alley behind it (always the most glamorous way to view homes), it reminds me of something Antonio Gaudi would have done. 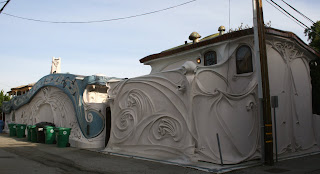 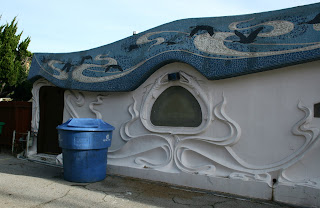 I quote again from the Architecture Guide to :”’s first real Art Nouveau building- Gaudiesque in the extreme.”

By way of comparison, here is Gaudi’s Casa Batlló in : 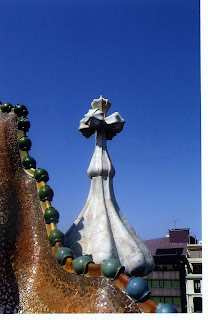