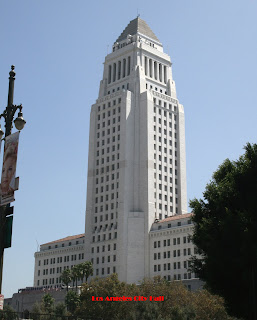 So September 4th is the 230th birthday of the city of ! To celebrate, let’s look back at one of the first mayors of the city- Stephen C. Foster. He served from 1854- 1855, then again in 1856. Why the break? According to “Mayors of Los Angeles”, published by the city- “He was a member of local vigilante groups formed to help control crime during a period of unprecedented lawlessness and once resigned his office to head a lynch mob.” (Italics mine.) Yeah! The mayor left his job to join a lynch mob! Once the job was done, he resumed his duties as mayor. I’m trying to imagine any politician today temporarily leaving office to do something like that.
But if you’re in the mood to celebrate LA’s birthday, why not take a hike? (No, I’m not insulting you.) Los Pobladores, a group made up of the ancestors of the city’s founding families, will take a nine mile hike on September 4- go to http://www.lospobladores.org/ for more information.
Posted by Lisa at 8:13 PM