In any major metropolis, land has had to be taken at some point to construct- or expand- an airport. In most cases, if the airport needed to expand, they moved farther away where there was available- and cheaper- land (like or ). But not LAX is smack dab in the middle of an urban area. There has been a battle for years over expansion. But when the airport expanded the first time, in order to enter the jet age in the 60’s, hundreds of homes in Playa del Rey were taken by eminent domain. (Many people have written about this- go to http://www.shanenickerson.com/ or http://www.examiner.com/) You can still see traces of these long-ago takings off of Vista del Mar and Waterview Street, such as the front door steps of homes, as well as neighborhood sidewalks and street corners. 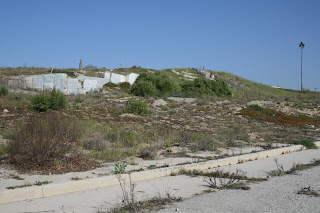 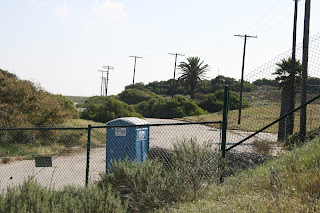 It’s like they’re waiting for someone to drop a house back down on them- maybe this is where Dorothy Gale came from!
Posted by Lisa at 8:24 PM